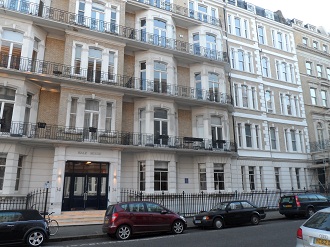 A divorcée who says she could not live outside the borough of Kensington in west London and is anxious when not in the locality has been awarded an extra £1m by a judge for a "housing fund."

The woman, who cannot be named for legal reasons, is involved in a court battle with her former husband over his £33m fortune. She told the High Court in London that she needed a £10m payout to meet her "reasonable needs," including a five-storey house worth almost £5m.

The woman told divorce judge, Mrs Justice Roberts, that she felt "frightened" when she left the exclusive west London borough. She dismissed suggestions by her ex-husband that she move to a £2.5m house in "less opulent" Shepherd's Bush or Battersea, and insisted that she be handed a home in "exclusive and sought after prime central Kensington." But Mrs Justice Roberts refused her demands and told her that she “needs to explore different areas.”

The pair were married in 1997 and separated in 2008, with the wife receiving an £8m payout the following year. She now has less than £5m of that initial sum left and went to court this year to ask for more – including a specific demand for the Kensington house. She wished to increase her total assets to £10m, including the value of the home.

Judge not persuaded that less opulent neighbourhoods are undesirable

The judge ordered the ex-husband pay her a £1.15m top-up on the £4.685m that remained from the earlier payout, to enable her to find a new home and create an investment fund giving her a £140,000 yearly income for life.

In refusing the claim for an abode in Kensington, the judge said: "Even allowing for the fact that she clearly has an anxious personality, I am not persuaded that any of these areas can be characterised as unsafe or inappropriate areas, devoid of the kind of amenities usually associated with areas occupied by professional families and others . . . I am entirely persuaded that a step down in her accommodation needs at that juncture is both necessary and appropriate."

The former wife of a self-made fashion millionaire won a £2.7m divorce settlement ten years after the couple separated in a claim her ex-husband says was a consequence of her boyfriend leaving her and her jealousy of his younger girlfriend, a court heard.

Glen Briers gave his wife Nicola £150,000 to pay off the mortgage and let her keep their £700,000 family home when they divorced in 2005, the court was told. She also received a £10,000-a-year salary and child maintenance – but he kept the business, which at one point was turning over £1m a year. Mr Briers said they made a "verbal agreement" at the time and that the "settlement" would represent a clean break between them.

After her relationship with her new partner broke down, Mrs Briers went to court asking for more from Mr Briers. Last year, a judge ruled that she should receive a further £2.7m of his assets of £10m. Mr Briers is asking the Court of Appeal to overturn the ruling, claiming that it was unfair and left her “in a position which is excessively favourable.”

Justin Warshaw, QC, for Mrs Briers, said that no legal settlement had been finalised. The deal they reached at the time was “not negotiated . . . but dictated by the husband,” he said. He said his client deserved her share of Mr Briers' fortune, for her “huge contribution” in caring for the children while the business grew.

Jonathan Cohen QC, for Mr Briers, told the Appeal Court it was unfair for him to now have to share the fruits of his hard work over a decade after the split.

Mr Cohen added: "This was not an undivided asset – the total assets had been divided, with the husband receiving the company and the wife the bulk of the remaining assets. The judge has provided the wife with a windfall which has no logical justification."

The judges reserved their decision.

If you would like to discuss any aspect of family law, are considering divorce proceedings or a trial separation, or want to draw up a pre or post-nuptial agreement, call us in absolute confidence on 03456 381381. Alternatively, email us at familylaw@ibblaw.co.uk.