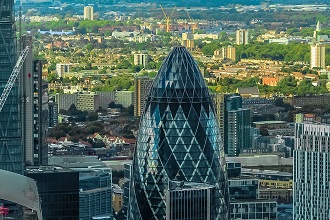 Research for the group’s annual crane survey – which measures the volume of commercial property under construction – found that office and residential development levels were either sustained or increased last year in big cites across the UK.

Leeds saw the highest levels of total construction since the survey’s records began in 2002. Office space proved a significant contribution to this – with 844,986 sq ft of office space added to the development pipeline and seven office sites comprising a third of new developments in the city. Office construction in Birmingham however saw a dip – with just two new schemes last year compared to seven in 2016. Despite this however, the total volume of office space under construction in Birmingham remains high at 1.4m sq ft, with experts predicting that 2019 will be a record-breaking year for office completions in the city.

Speaking on the “marked increase” in city office developments, Deloitte’s Simon Bedford noted the “continued draw to all these regional cities for major businesses,” adding:

“Investor confidence is thriving… With creative, media and tech occupiers leading some of the major office deals in 2018, twinned with growing diversity in talent, these are good foundations for regional growth in the years to come.”

Perhaps the most promising statistics came from Manchester, which saw 2,569 residential units delivered to market – the highest number in over a decade – and 22 new residential developments under construction, double the volume in 2016. As demand for city centre accommodation increases, analysts project that Manchester will see 14,480 new residential properties developed between 2019 and 2021 – compared to under 14,000 in the past ten years – with 2020 estimated to see the highest number of new developments in 20 years.

A planned 200m tall residential building featured in a multi-tower scheme is set to eclipse the city’s current tallest building, the 47-storey Beetham Tower office site, which was completed in 2006 and stands at 169m.

Manchester’s exceptional construction levels were singled out in Mr. Bedford’s statement on the survey’s results, with the real estate expert noting:

If [the city] had featured in the recently published North American Crane Index, it would have ranked number two – behind Toronto but in front of Seattle, Los Angeles and Chicago.”

Manchester’s development outlook is particularly impressive given the city only had one site under construction as recently as 2011. Overall, the strongly positive outlook of commercial construction across major cities has been praised by analysts, who admit that “to have construction figures this healthy is somewhat of a surprise given a myriad of market uncertainties.”

These figures bode well for the broader UK property sector and economy, with experts noting: “developer confidence is a key indicator for economic health and to have this many significant construction starts over the last 12 months, especially in speculative office schemes, is testament to the resilience of the regions and appetite for growth.”

How to Choose the Right Commercial Property from IBB Solicitors

Whether you are acquiring, disposing of, developing, managing or funding commercial property, we can help. Call us now for expert, impartial and professional advice on 03456 381381, or email us at CRE@ibblaw.co.uk