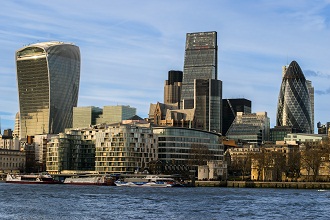 The company’s Middle East In and Out 2017 report shows that Middle Eastern investors spent £1.28bn on commercial London property between April 2016 and 2017 and now own more than 24m sq ft of property in the capital.

New York City saw the next biggest investment from the Middle East, with £625m of property snapped up over the period, while Washington DC was third at £357m.

"Middle Eastern investors appear undeterred by the Brexit vote and are attracted to London by the depreciation of sterling, high demand, long leases and strong yields".

Asian and UK money forecast to lead London property in 2018

Commentators in the real estate industry also expect a wave of Asian money into London property to continue, although Chinese firms could be limited by the capital controls that the Beijing government has put in place.

Japanese and Korean funds, in particular, could be setting their sights on London and 2018 could be the year that heralds a return for UK funds after a period of biding their time since the global financial crisis.

The firm says transaction volumes reached £55bn last year and are likely to remain above £50bn this year. Colliers believes industrial assets will be the top-performers and notes that a trend for flexible working is set to grow, placing pressure on landlords to provide more flexible working spaces.

Mark Charlton at Colliers said performance is “likely to moderate” in the next 12 months “as pricing remains pressured and rental growth modest,” but adds that the market “will become less volatile, offering attractive, stable returns for investors.”

Residential property construction led the way with a score of 55.3, slightly down on the 56.6 recorded in November, while the commercial construction sector fell to 47.2, down from 48.4 in November, marking six consecutive months of falls. The overall reading for the PMI was 52.2, down from 53.1 in the previous month.

Duncan Brock of the Chartered Institute of Procurement and Supply said the continued fall in commercial activity appears to be “testament to Brexit-related uncertainty on the horizon.”

Howard Archer, chief economic adviser to the EY Item Club, commented: “Despite showing modest expansion in December, the PMI indicates that the construction sector found life very challenging in the fourth quarter of 2017.”

Hong Kong offices are the world's most expensive

A similar report from Cushman & Wakefield has also ranked Hong Kong top with an occupancy cost per desk space of $27,432, with London's West End second at $22,665.

Whether you are acquiring, disposing of, developing, managing or funding commercial property, we can help. Call us now for expert, impartial and professional advice on 01895 207285, or email us at CRE@ibblaw.co.uk