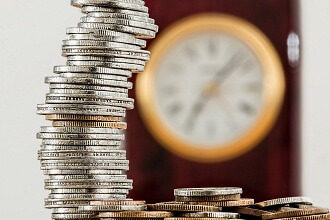 On the breakdown of a marriage, it is common for one party to be ordered to pay regular payments, known as periodical payments or spousal maintenance, to the other party who has less or no income with which to support themselves following the separation.  These payments are usually made on a monthly basis to support the transition for one spouse to financial independence and effectively result in a clean break being (no ongoing financial relationship) deferred until this support also terminates. The payments can be made for a defined period of time, for example 3- years or as is most common. until the youngest child turns 18 or ceases full-time secondary education (depending upon the ages of the children at the time). The rationale here is that at this time the party in receipt of the income is able to enhance their income more easily as they will not be held back by looking after the children, and will not have the cost of the children as they are considered adults at the age of 18 and therefore independent.

Another option for the Court in financial remedy cases in the past was something called a ‘joint lives order’. These allowed for the income to be paid by one party until the death (or in some cases retirement) of the other.  Over recent years, there has been a noticeable move away from joint lives orders which can be lengthy and onerous. In recent years, the Court is certainly less willing to support this type of order than they were in the past and prefer to achieve a clean break for both parties as soon as possible. This involves both parties having to become financially independent and support themselves.

The case of Mills v Mills 2018 UKSC deals with cross-appeals by both parties regarding the variation of periodical payments, which had been ordered on a joint lives’ basis.   The parties had divorced after a marriage of 15 years and resolved the financial issues by way of a consent order, in which it was agreed that the husband would make periodical payments to the wife at an annual rate of £13,200 due to the wife’s lower earning capacity and ill-health.  The husband appealed this aspect of the order on both the amount that he was ordered to pay and the term over which he was to pay this. The husband requested that this was capped at 10 years.  The wife cross appealed that the amount should be increased, as she had incurred considerable debts since the divorce.  As the wife’s outgoings had increased due to choices she had made, the Judge declined to vary the order for periodical payments either upwards or downwards.  As no fixed period could be identified that would allow the wife to “adjust” without undue hardship to the termination of income, the Judge held that the original order should remain.  The payments were to continue at the same rate on an open-ended basis.

This was an approach that was adopted widely by the Family Court when dealing with cases involving a disparity between the parties’ income position and a justification as to why one party would not be able to enhance their income in the short term.

In a significant departure from the Mills V Mills – previously known as the case that offered a “meal ticket for life”, the husband in the recent case of Waggott v Waggott 2018 EWCA successfully argued that a joint lives’ maintenance order should be capped to a non-extendable period of 3 years.  Lord Justice Moylan held that the Judge in the first instance had failed to give proper consideration to the clean break principle and the wife would be able to adjust without undue hardship as she had substantial liquid capital of approximately £9.6 million to utilise as income.

Since the case of Waggott v Waggott, there has been a continued shift towards non-extendable terms for maintenance to encourage the receiving party to re-enter the workplace and become financially independent.

In April 2019, Lady Hale stated that she saw the goal of divorce settlements as being “to give each party an equal start on the road to independent living.”  Each case will turn on its own facts, however it seems likely that joint lives’ orders are soon to be a thing of the past.

In summary, although there are often a range of issues in dealing with whether maintenance payments are justified and if so, the quantum and period over which the income is to be paid, one factor is at least clear.  The Court is far less likely to consider it attractive to have an ongoing financial relationship between the parties for any length of time, if at all. The emphasis is now on how best to achieve a clean break for both parties as soon as is practicable. This could require one party having to enhance their income and earning potential sooner rather than later.