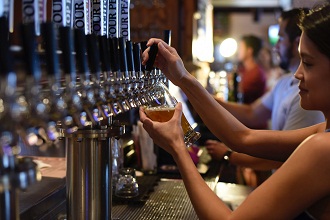 An East London pub has reached a deal with local authorities and property developers to protect it from noise complaints as residential blocks are built nearby.

The Deed of Easement granted to The George Tavern, which also hosts theatre and music events, will stop the venue’s future neighbours from complaining about noise. The tavern’s landmark winning of the legal right to make noise means that future gigs will not have to be silenced when a new six-storey residential block in the vicinity is completed.

“It’s a real victory not just for The George but for [other] pubs and music venues that would be threatened by proposed residential developments.”

The theatre is only the second venue in London where a Deed of Easement measure has been applied in this way, with the first being the Ministry of Sound. The campaign to protect The George Tavern with boosted legal rights won support from notable people in the arts, including Sir Ian McKellan and punk poet John Cooper Clarke.

Easements are signed, legal documents generally agreed by a land owner and another nearby proprietor, allowing the latter rights to use the former’s land for a specifically stated purpose.

In The George Tavern’s case, the easement secures the theatre the right to transmit more noise than would usually be acceptable over the new residential block’s land, without fear of being sued for nuisance or losing their licence. The use of Deed of Easement bills in this case and that of the Ministry of Sound suggests that the agreements may become a usual way to protect London venues from noise complaints, as new residential developments are increasingly built in previously non-residential areas.

In response to the council’s approval of an easement for The George Tavern, the venue’s legal team commended:

“Tower Hamlets has grasped the nettle here by insisting that this essential legal mechanism goes hand-in-hand with the planning permission.”

They further noted: “Music venues round the country are justifiably worried about being shut down because of noise complaints from new developments,” adding:

“The Deed of Easement we drafted and agreed with the council and the developer should now be considered by other local authorities, as it’s the only way to fully safeguard local pubs and music venues, whilst still enabling much-needed housing to be built in urban areas. It’s a win-win situation.”

Heralding the landmark approval as a turning point for venues across England, Pauline Foster said:

“The worry of having neighbours close by who might make noise complaints was a real threat for the George. We could have lost our licence almost immediately. The security of the Deed of Easement is fantastic for us and for other pubs and venues, who stand to benefit from this as well.”

Meanwhile, a spokesman for the developer of the new, residential block to neighbour the venue said they were “delighted” with Tower Hamlets council’s decision.

Noting that the development scheme “provides new commercial space, new homes and affordable housing in a high-quality building” on a previously long “derelict” and “vacant” site, the developers added:

“We have worked extensively with The George in developing the scheme which from the outset included measures to protect the pub,” stating:

“We believe future residents, people working in the offices and the George can benefit each other in a positive way.”

To discuss your commercial property or land development dispute please contact a member of our team on 03456 381381. Alternatively please send an email with your name, contact information and brief details of your property dispute to propertydisputes@ibblaw.co.uk and one of our team will be able to help you.